A Texas governor had won the White House on a promise to spread what he called the “Texas miracle” — the package of reforms credited with boosting performance in the state’s public schools. Those policies inspired the George W. Bush administration’s signature No Child Left Behind Act, which greatly expanded federal regulation of public education. 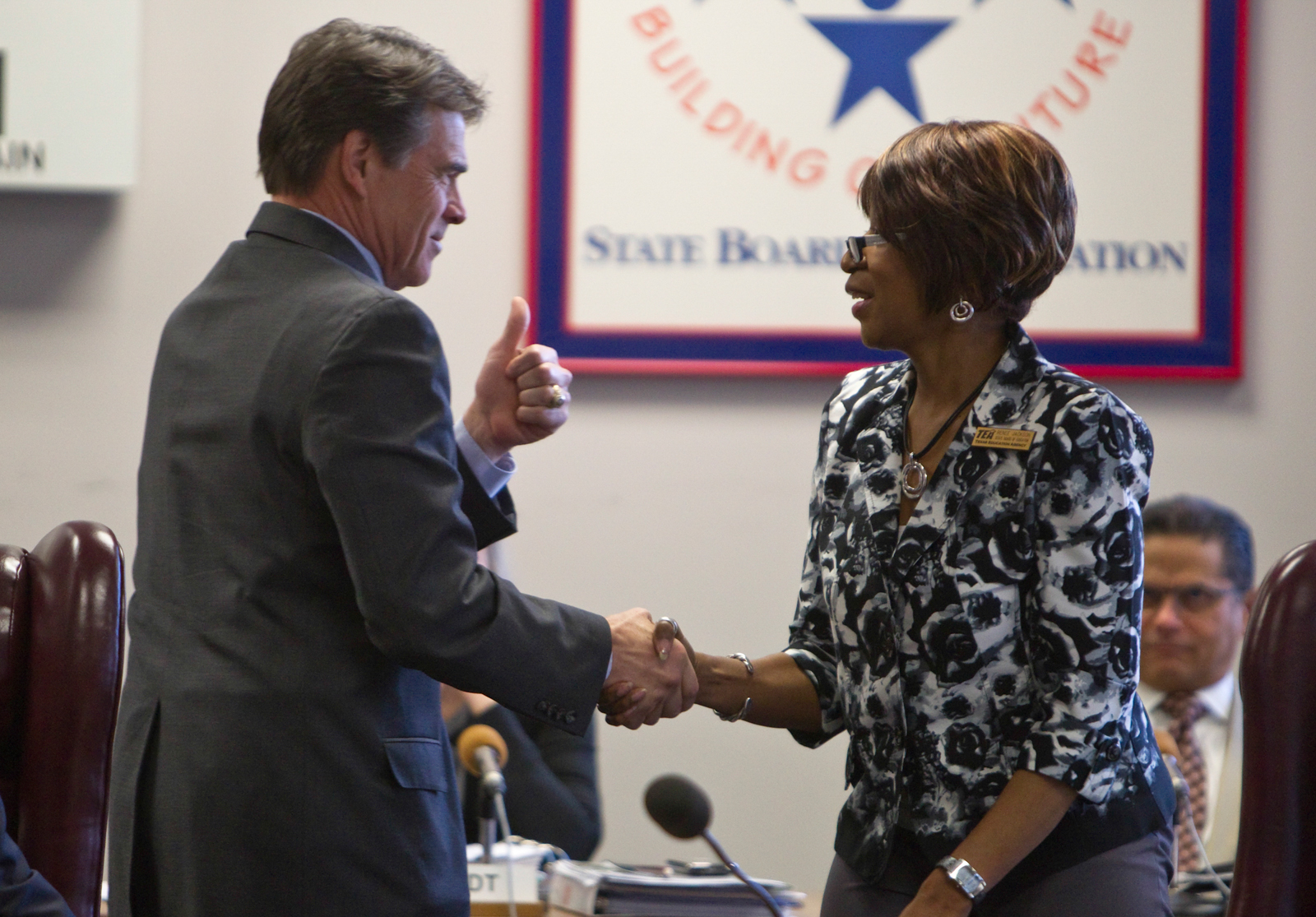 Gov. Rick Perry at a State Board of Education meeting in February 2013. Photo by Marjorie Kamys Cotera

Less than a decade later, as Perry geared up for his own presidential bid, he would propose something radically different: dismantling the U.S. Department of Education and vastly diminishing the role of the federal government in public schools. He would call No Child Left Behind a “monstrous intrusion into our affairs.”

Guarding Texas control of public school classrooms has been the most prominent feature of Perry’s approach to education. But as he leaves office, his impact will also be felt in state-level matters, where his involvement has tended to be less public.

The high-profile battles with Washington began in the summer of 2009, when Texas declined to sign on to a nationwide effort to develop common academic standards in reading and math. Known as Common Core, it had the support of both Republican and Democratic policymakers. Only Alaska joined Texas in refusing to participate.

Though it drew little attention at the time, the move was the first sign of the political firestorm that would ignite over the initiative. Four years later, concern over a potential federal takeover of education has driven at least four states to drop them from their public schools, with numerous others facing pressure to do the same.

A few months later, a decision not to apply for the Obama administration’s Race to the Top competition — which meant losing out on $700 million in federal funding — once again made Texas an outlier. The program, which initially set aside $4.35 billion in grants for states that agreed to put certain reforms in place, had until then largely enjoyed bipartisan praise.

“We would be foolish and irresponsible to place our children’s future in the hands of unelected bureaucrats and special-interest groups thousands of miles away in Washington.”

— Gov. Rick Perry on the Obama administration's Race to the Top competition

When Texas announced it would not participate, Perry became one of its most vocal critics.

“We would be foolish and irresponsible,” he said at the time, “to place our children’s future in the hands of unelected bureaucrats and special-interest groups thousands of miles away in Washington.”

When Perry turned his attention to state-level education policy during his time in office, his agenda was more often focused on the state’s universities and colleges. But he has not shied from exerting influence — with his veto pen or an executive order — on matters affecting Texas public schools.

Perry set up Texas’ first statewide teacher incentive program after such an initiative failed to pass the Legislature in 2005. With an executive order, he put aside $10 million in federal money for teachers who had shown progress with students in economically disadvantaged school districts. Though lawmakers expanded it in 2006, it was discontinued in 2009 after a three-year study commissioned by the Texas Education Agency found it had little effect on student achievement.

In 2009, he killed legislation that would have required limits on class size and offered full-day kindergarten. In his veto statement, he said the money was better used to serve more children under the state’s current half-day program.

During the 2011 budget shortfall, Perry made clear that he would not sign a budget that used the state’s Rainy Day Fund, a tactic many called for to help ease deep cuts to public education.

Legislators ultimately enacted a historic reduction in funding for public schools: $4 billion in state money and almost $1.4 billion in discretionary grants that supported programs including remedial intervention and after-school care.

An exchange between two Republicans on the Texas House floor about an amendment that became one of the last efforts to use the Rainy Day Fund for public schools revealed the depth of the governor’s influence:

“Is it possible,” Rep. Van Taylor of Plano asked, “if the amendment stayed in that the governor might veto the bill?”

Rep. Phil King of Weatherford replied, “Well, my impression of Gov. Perry is that he usually does what he says that he’s going to do.”

Those budget cuts gave rise to a massive school finance lawsuit, in which more than two-thirds of Texas school districts sued the state. In August, nearly three years after the trial began, a state district judge in Travis County ruled in their favor, finding the state’s school finance system unconstitutional.

The Texas Supreme Court is expected to rule on an appeal of the decision late next year.