When Gov. Rick Perry leaves office next month, he’ll wrap up a three-decade stretch in state elective office that concluded with his being the longest-serving governor in Texas history.

Perry’s 14-year tenure in the state’s highest office coincided with the ever-tightening grip of Republican rule, sweeping conservative reforms and more than a few controversies.

It was also marked by unprecedented population growth and an enviable economic expansion in Texas. The state led the nation in job creation during Perry’s reign, and it added more people than any other state between 2000 and 2010 — numbers that continue to grow.

From his first legislative session as governor in 2001, when Perry shocked the political establishment with a record 83 vetoes, to his final days in office, when he used rare emergency powers to send National Guard troops to the state’s border with Mexico, the ruggedly handsome farm boy from West Texas signaled early and often that he would cut a unique and flashy trail through the state’s political countryside.

Boiling down Perry’s legacy into a few bullet points isn’t easy and will undoubtedly leave supporters and detractors alike unsatisfied.

But memories fade, and not every event that seems newsworthy today will stand out in the history books or become part of the state’s collective political memory. (And there could be a new set of mileposts on a future legacy tour if Perry runs for president again — a move he is currently considering.)

With those caveats, here are five — and a half — things people will probably remember years after Perry has left the Texas Governor’s Mansion.

When Perry hands over power to Gov.-elect Greg Abbott on Jan. 20, he will have served 5,144 days in office, making the previous records seem puny and insignificant. Gov. Allan Shivers, who took over after Gov. Beauford Jester died in 1949, previously held the distinction as the longest continuously serving governor with a mere seven-and-a-half years in office, back when the terms lasted only two years. 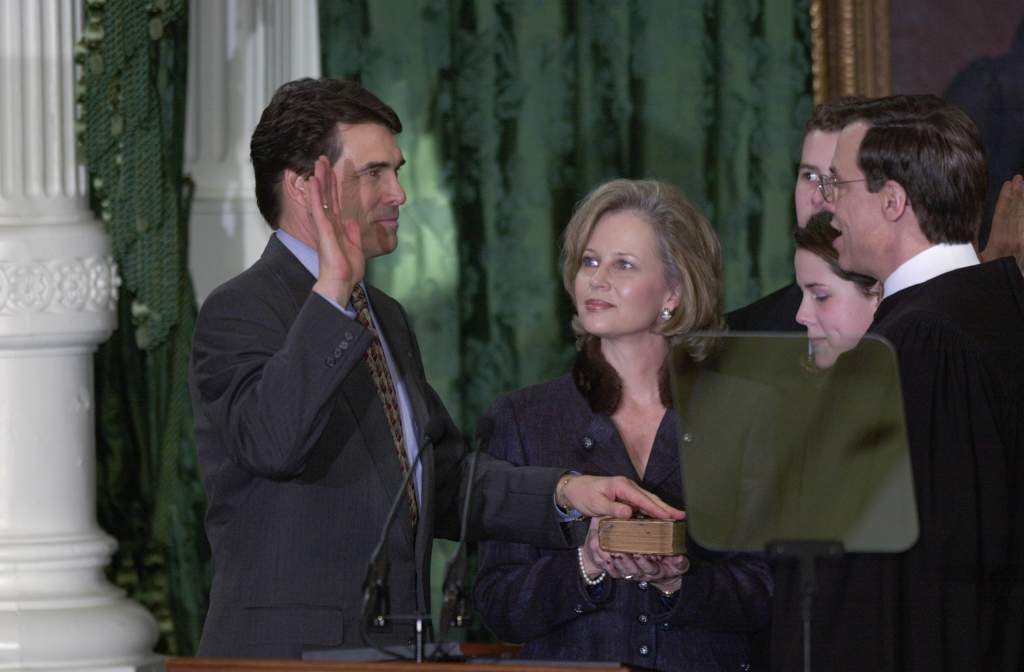 Gov. Rick Perry at his swearing-in as governor on Dec. 21, 2000. Photo by Bob Daemmrich

Perry, who had been elected lieutenant governor when Bush won his second term, was sworn into office as the 47th Texas governor on Dec. 21, 2000, and he went on to win three consecutive four-year terms. He has used the longevity to wield power with an increasingly tight fist.

At last count, Perry had made more than 8,000 appointments, allowing him to put his conservative stamp on every corner of state government — all from a perch that the state’s founding fathers, suspicious of centralized authority, intentionally weakened.

Perry championed sweeping curbs on lawsuits, some of the most stringent abortion limits in the nation, the strictest voter ID statute in the country, a constitutional ban on gay marriage and steep cuts to programs once seen as sacrosanct, including public education and women’s health programs.

People crossed Perry at their peril, whether they were appointees who dared support a political challenger or lawmakers who opposed his legislative program. Jim Henson, a Texas Tribune pollster and director of the Texas Politics Project at the University of Texas at Austin, said Perry expanded the powers of the governor’s office “in a way that is certainly not contemplated in the Texas Constitution nor really in the political culture of the state.”

“I think Perry really learned how to use the office,” he said.

The most appropriate use of the word “miracle” in relation to Texas is in the eyes of the beholder.

Critics will find plenty wrong with a state that has the highest percentage of uninsured residents in the nation, produces more greenhouse gas emissions than any other state and has led the nation in workplace fatalities for 10 of the last 14 years. 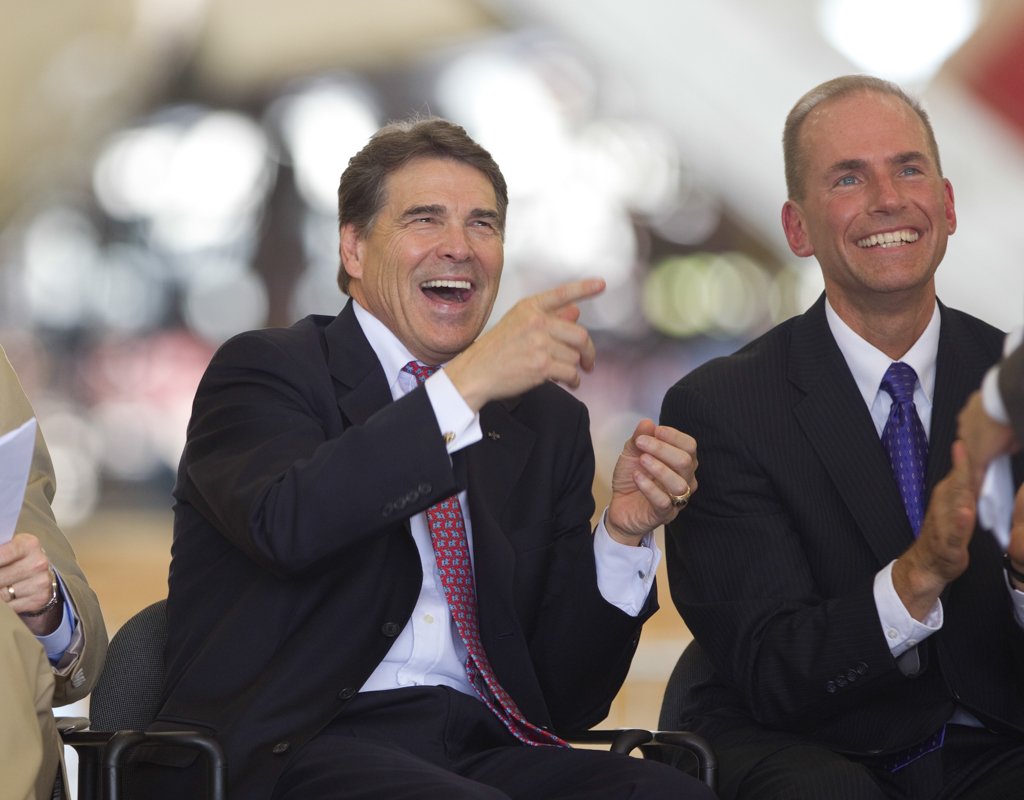 Gov. Rick Perry and Dennis Muilenburg, a Boeing executive, at a bill-signing ceremony in San Antonio. Photo by Bob Daemmrich

But any governor in America would be happy to boast, as Perry has, about the kind of economic expansion Texas has experienced in the last decade or so.

From 2003 to 2013, Texas produced a third of the net new jobs in America. It has been the top exporting state for the last 12 years in a row, and recently Texas surpassed California as the top exporter of technology, according to the TechAmerica Foundation.

Under Perry, Texas has been given top honors five times for corporate relocations by Site Selection magazine, and the governor credits the state’s pro-business policies — including millions in tax subsidies used to entice companies such as Toyota to set up its American headquarters here — as a major factor driving the boom.

Detractors note that the corporate relocations account for a tiny percentage of the jobs Texas has created and say the state — brimming with shale oil — would rank as a major employment center no matter who was governor.

Don’t expect that, or anything else, to stop Perry from bragging about the Texas Miracle anytime soon, though.

Texas was in trouble in 2005 when the state Supreme Court declared the state’s school finance system unconstitutional. The chief concern was that too many districts were charging the maximum rate for local property taxes, prompting the high court to declare that Texas had effectively adopted a prohibited statewide property tax.

At the same time, the state’s loophole-ridden business tax had become all but voluntary. It applied only to corporations and limited liability companies, so many reformulated as non-taxable limited partnerships to avoid paying it.

“Folks may not have liked the end result, but the margins tax, when you look how it came about, it was really Perry’s finest hour.”

— Dale Craymer, president of the Texas Taxpayers and Research Association

The solution Perry advocated: Craft a business tax that applies to most companies regardless of structure, raise the cigarette tax by a $1 a pack and use all that money to reduce property taxes while giving teachers a $2,000 pay raise.

But Perry got the plan passed with bipartisan support, the schools stayed open and businesses that used to pay nothing became taxpayers for the first time.

“Folks may not have liked the end result, but the margins tax, when you look how it came about, it was really Perry’s finest hour,” said Dale Craymer, president of the business-backed Texas Taxpayers and Research Association. “It was a crisis averted.”

The tax is still unpopular, and Republican leaders want to modify it or even get rid of it, but they’re likely to find that it’s easier said than done.

For 53 cringe-inducing seconds during a nationally televised Republican primary debate on Nov. 9, 2011, Perry desperately searched his frozen brain for the name of the third federal department he wanted to shut down if elected president.

“I would do away with the Education, the, uh, Commerce and, let’s see,” he said, looking down at his notes for any clues. “I can’t. The third one I can’t. Sorry. Oops.”

Commentators pronounced Perry’s presidential effort dead, and in the ensuing weeks, late-night comedians made the Texas governor the butt of endless jokes.

After his inevitable withdrawal from the race weeks later, Perry blamed health problems and a lack of preparation. Now, with a bespectacled new look, more time to study up and the benefit of hindsight, he’s promising a better performance should he run for president again in 2016.

The significance of the “oops” moment is often overstated in recaps of Perry’s first presidential bid. According to polling data, his popularity had already declined significantly following fumbles in a previous debate and a strongly worded defense of a Texas policy allowing the children of undocumented immigrants in-state tuition for public colleges and universities.

But like Vice President Dan Quayle’s misspelling of potato (with an “e”) in a school classroom in 1992, or Democrat Howard Dean’s primal scream as his presidential campaign was going down the toilet in 2004, Perry’s 2011 debate meltdown has earned a permanent spot in the political blooper hall of fame.

Political forecasts called for smooth sailing as Perry prepared for the final victory lap at the end of his long tenure. A felony indictment changed all that.

Now, just like the governor’s often messy battles with political rivals and his no-holds-barred approach to legislative negotiation, Perry is spending his remaining days in office at the center of a swirling controversy he helped create. 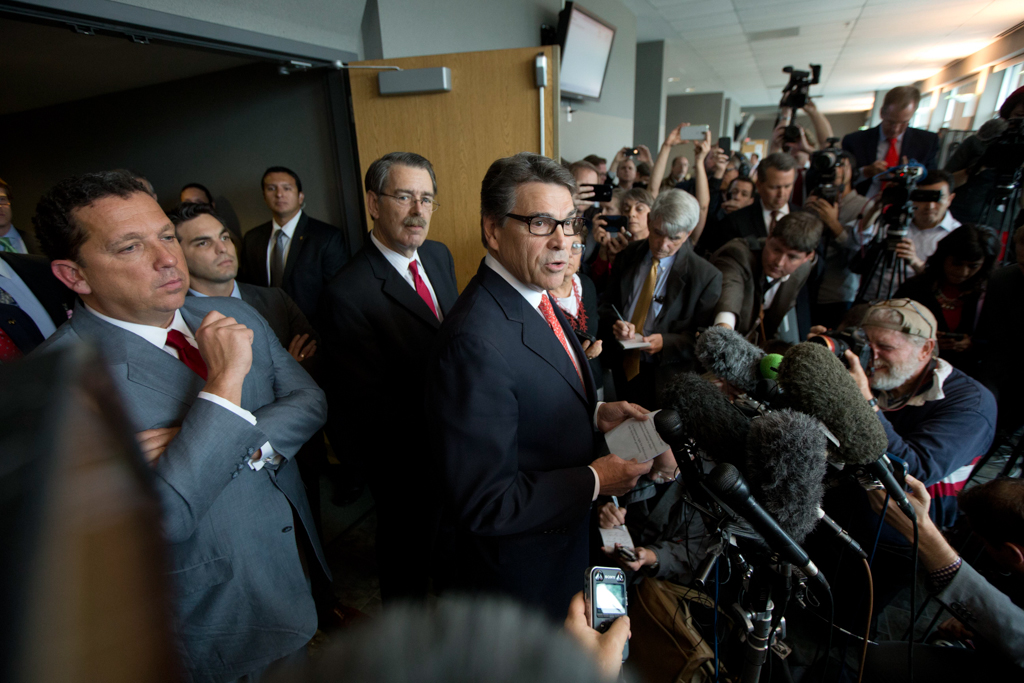 Gov. Rick Perry outside the Travis County courtroom where he appeared for a pre-trial hearing following his indictment in an abuse-of-power case. Photo by Bob Daemmrich

On Aug. 15, a grand jury indicted Perry on two felony counts — abuse of official capacity and coercion of a public servant — stemming from his 2013 veto of funds destined for a special investigative unit inside the Travis County district attorney’s office.

Perry blasted the prosecution as a politically motivated “farce,” and has trotted out legal scholars from both sides of the spectrum to criticize it.

No matter what happens, Perry’s 11th-hour ride through the criminal justice system guarantees a mention in the history books. He’s the first governor since James “Pa” Ferguson to get indicted, and the uncommonly brash way he has confronted the allegations provided a unique twist to the way potential presidential contenders handle criminal justice challenges.

Granted, swagger is not an event, a policy accomplishment or a political milestone. It’s a style — a cocky way of walking, talking and conducting business. And Perry has made it his calling card.

When a coyote threatened his Labrador puppy in 2010, Perry didn’t grab the pooch and run. He pulled out his pistol and shot. The incident later made the papers.

When Perry was courting the Tea Party in 2009, he did not just promise to get the federal government off the people’s backs. He flirted with secession.

And when Perry got booked on felony charges at the Travis County Courthouse this year, he did not slip in quietly through the back door. He held a press conference on the courthouse square. After smiling for his mug shot, he went out for ice cream near downtown Austin and posted a picture online to show he was keeping his cool.

Later, through his political action committee, he sold T-shirts with that same mug shot plastered on the front.

Disclosure: The University of Texas at Austin is a corporate sponsor of The Texas Tribune. A complete list of Tribune donors and sponsors can be viewed here. 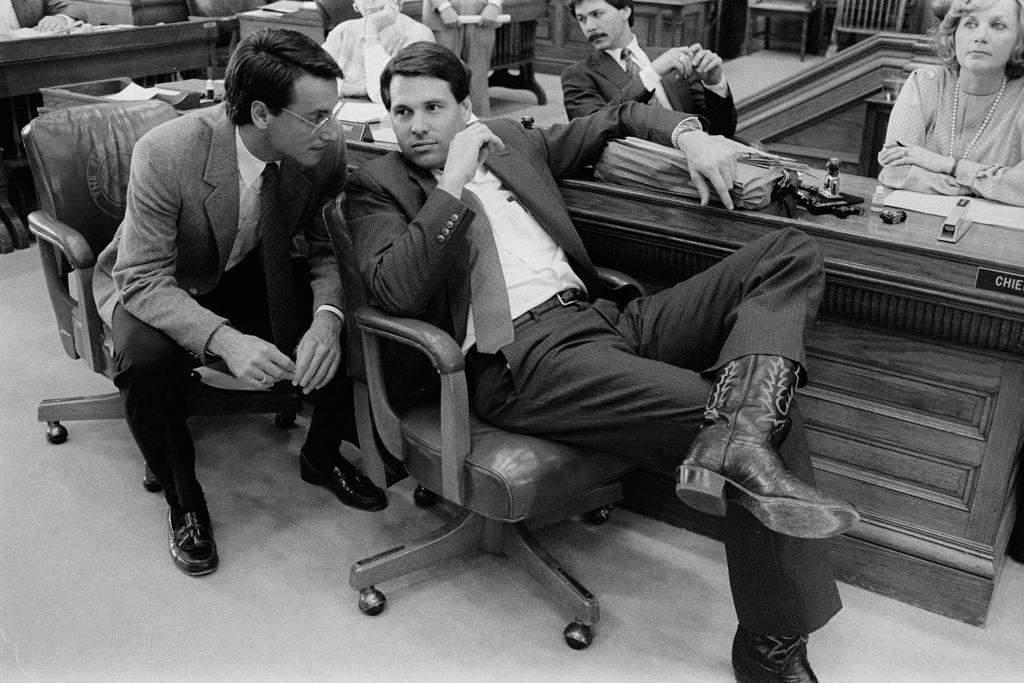