When Gov. Rick Perry signed legislation in 2001 making Texas the first state where some undocumented immigrants could pay in-state college tuition rates, it signaled his acknowledgement that a population living in the shadows should be able to contribute to the state’s success.

Perry’s compassion was tempered, however, by frustration with a broken immigration system that put state lawmakers on the spot deciding how to help Texans brought to the country illegally as children through no fault of their own. 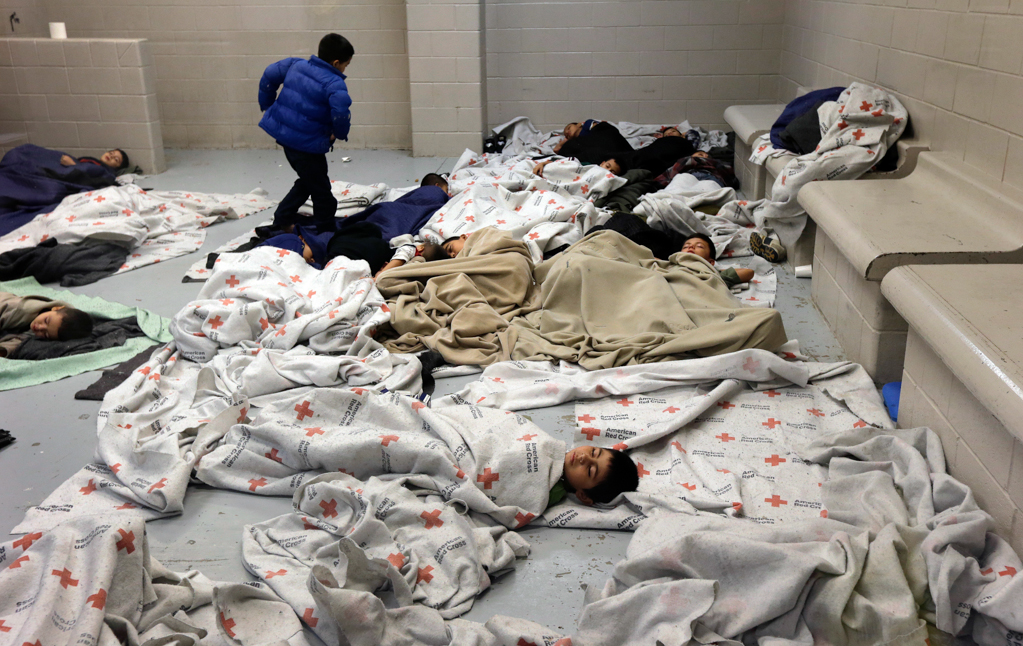 Detainees in a holding cell at a U.S. Customs and Border Protection processing facility on June 18, 2014, in Brownsville. Photo by Eric Gay

Thirteen years later, Perry’s frustration remains intact. But critics argue his compassion toward the undocumented population has waned since he took office, pointing to his recent track record on immigration.

Some residents say Perry has offended their communities with policies leading to “militarization” of the border, including his 2014 order deploying the Texas National Guard and a multimillion-dollar surge of state police to the Rio Grande Valley. The influx of law enforcement has since been expanded to include the entire Texas-Mexico border: a 1,254-mile stretch of terrain Perry has insisted is porous, and that Washington ignores.

The tuition bill and border surge bookend Perry’s evolution on immigration. It includes what would be considered a moderate stance as recently as 2007, one year after his predecessor, former President George W. Bush, failed to convince Congress to pass a comprehensive immigration reform bill.

“Illegal immigration drains the resources of our schools, our hospitals and our law enforcement agencies. But I do not believe it is realistic to deport 12 million people already here illegally,” Perry said in his 2007 inaugural speech, according to a transcript. “We have to understand why millions of people come here, and why many more have died trying. It is for something as basic as the freedom to find a job and feed their families.”

“Allowing them to remain here will only encourage the next group of individuals to undertake this very, very dangerous and life-threatening journey.”

— Gov. Rick Perry to a congressional committee in 2014

That sentiment came a year after publication of a comprehensive study on the impact of unauthorized immigration on the state’s coffers. It found that the state would have lost more than $17.5 billion in gross domestic product if the 1.4 million undocumented immigrants who lived in Texas in 2005 were deported.

It also showed that undocumented immigrants produced about $1.58 billion in in-state revenue, more than the $1.16 billion in costs they generated by using state services. Local governments saw a loss of about $1.44 billion in combined health care and law enforcement costs that weren’t reimbursed, said the study by then-Comptroller Carole Keeton Strayhorn, who was running for Perry’s seat and tried to peg him as soft on immigration.

But 2006 also saw Mexican cities bordering Texas, mainly Nuevo Laredo, Tamaulipas, in the throes of cartel wars that led to near-daily shootouts and sparked fears of spillover violence. Two years later, Ciudad Juárez, across from El Paso, became the epicenter of such violence. 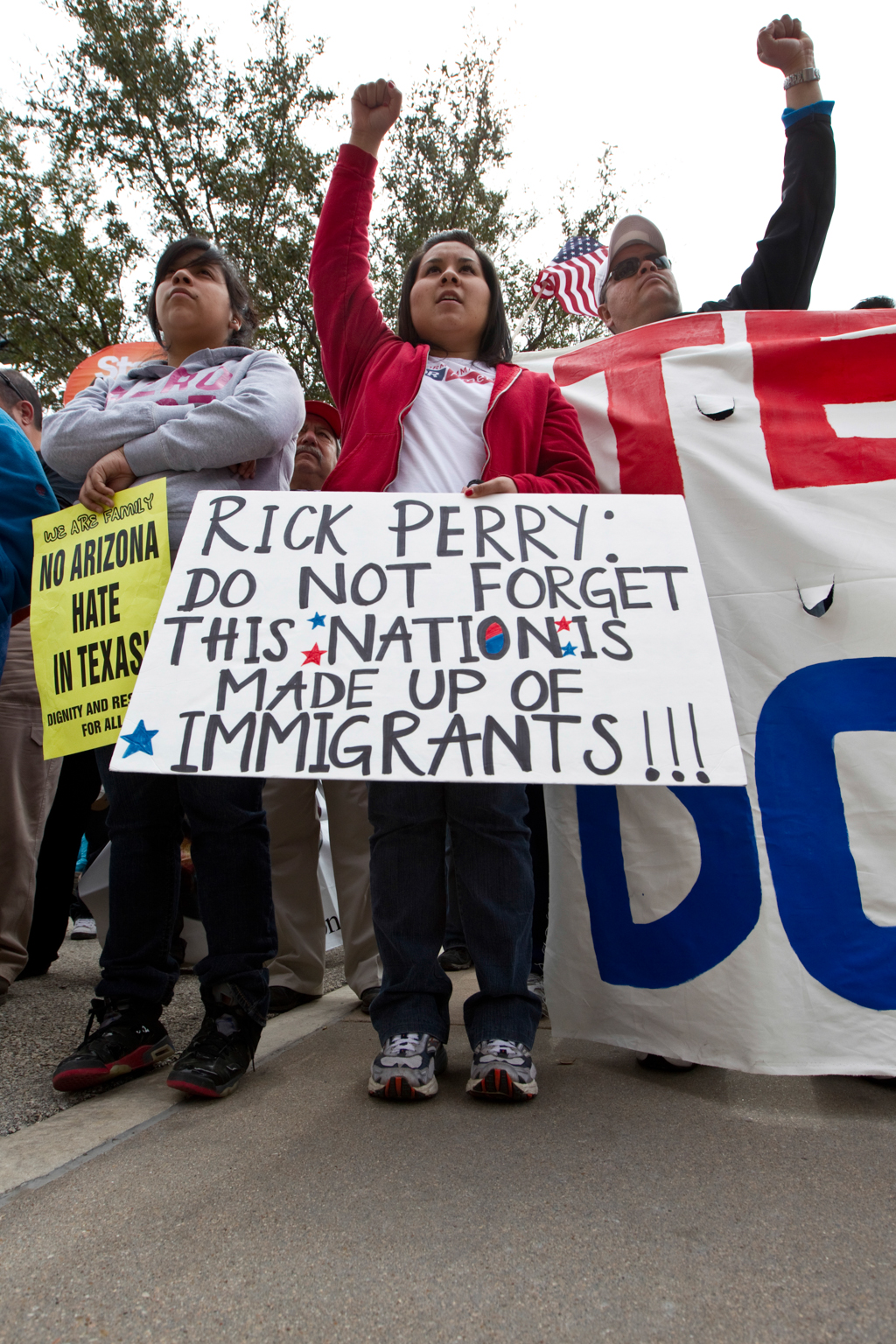 A rally at the Texas Capitol protesting legislation that would require Texas peace officers to check the immigration status of suspected undocumented immigrants accused of crimes. Photo by Bob Daemmrich

When Perry ran for re-election in 2010 against former Houston Mayor Bill White, there was a marked change in his tone and actions. The specter of spillover violence and the issue of Texas cities harboring undocumented immigrants through what are called “sanctuary cities” policies were front and center during the campaign. (Perry made a now-infamous mistake in 2010 and said car bombs were going off in El Paso when it was actually Ciudad Juárez.)

After winning another term that year, Perry stuck to his message and veered further to the right in 2011. Legislation to ban sanctuary cities — a term for governments that forbid local law enforcement from asking about the immigration status of people who are detained or arrested — was on Perry’s list of emergency items during the 82nd Legislature, during the regular and special sessions. The efforts failed, but drove a wedge between Hispanics and the governor.

“The support that he’s shown for the sanctuary cities bill is really counter-productive,” Arturo Vargas, then the executive director of the National Association of Latino Elected and Appointed Officials Educational Fund, said in 2011.

While running for president in 2012, Perry reiterated his support for the in-state tuition bill he signed, and said it was heartless to oppose it. He was attacked by Tea Party groups and sank in polls, although he backtracked quickly. He has since stuck to his hardline philosophy.

In the summer of 2014, Perry said the flood of undocumented children who were entering Texas illegally through the Rio Grande Valley without supervision should be sent back to their home countries immediately, ignoring cries from advocacy groups that said the children were escaping not just poverty, but gangland violence in Central America.

“Allowing them to remain here will only encourage the next group of individuals to undertake this very, very dangerous and life-threatening journey,” he told a congressional committee.

He’s followed that by expanding the border law enforcement surge on the border through August, though the National Guard will be gone in March. The effort, which has the support of House Speaker Joe Straus, R-San Antonio, and Lt. Gov. David Dewhurst, will cost about $86 million.

He’s capped off his record-long stint at the Governor’s Mansion by issuing his own executive order in response to President Obama’s unilateral move to grant deportation relief to as many as 5 million undocumented immigrants in the country. (About 1.7 million live in Texas.) Earlier this month he mandated that all state agencies and all employers with state contacts use the federal electronic verification system known as E-Verify.

“Texas’ increased law enforcement presence in the border region is all the more necessary as the federal government continues to ignore the very real issue of border security in favor of political posturing on immigration,” Perry said when he announced his order. “It’s clear now, more than ever, that Congress must finally pass a bill that dedicates the necessary resources to securing our border, once and for all. Without border security, immigration reform is a fruitless exercise.”