As Gov. Rick Perry himself has said — and as his critics are fond of pointing out — he did not demonstrate significant interest in academia while an undergraduate student at Texas A&M University.

“Four semesters of organic chemistry made a pilot out of me,” he joked in a 2011 speech at Liberty University.

But during Perry’s time as a statewide elected official, higher education policy has often been at the forefront of his mind. As lieutenant governor, he formed a Special Commission on 21st Century Colleges and Universities in 1999. 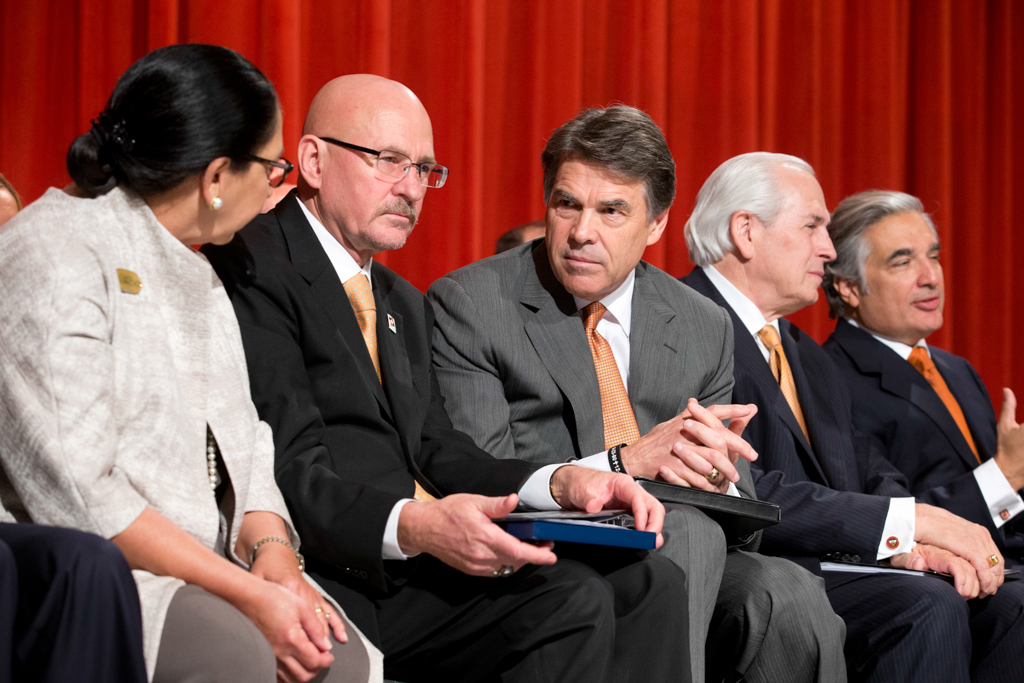 Gov. Rick Perry with state and local leaders at the ceremonial signing of a merger bill between the University of Texas-Pan American and UT-Brownsville in 2013. Photo by Bob Daemmrich

And over the course of his decade and a half as governor, he has certainly had influence on the state’s colleges and universities, but he has at times pushed and pulled in contradictory directions.

In recent years, Perry has emerged as a strong critic of rising tuition. In 2011, he called on the state’s public universities to create undergraduate degrees that cost $10,000 including books. During the 2013 legislative session, he encouraged the passage of a bill that required public universities to offer payment plans that fixed tuition at a set rate for four years. This year, he successfully pushed for the University of Texas System to keep tuition flat at its academic institutions.

“To put a college degree within reach for more students and combat the epidemic of student indebtedness, we should place a far greater emphasis on controlling the spiraling costs of a college education,” the governor wrote to the chairman of the UT board.

But it was on Perry’s watch in 2003 that the state’s approach to higher education tuition fundamentally changed.

That year, the ability to set tuition at the state’s public universities was transferred from the Legislature to the schools’ respective governing boards — the members of which have all been appointed by the governor. Since tuition was deregulated, average tuition and fees statewide has more than doubled.

“We must do everything we can to continue making higher education an achievable dream for all Texans.”

“We must do everything we can to continue making higher education an achievable dream for all Texans,” the governor said in his 2013 State of the State address. And his website accurately notes that more than 200,000 more students are enrolled in the state’s colleges and universities now than when he first took office.

No doubt many of them are taking advantage of the TEXAS Grants program, the state’s primary source of financial aid for needy students, which was created when Perry was lieutenant governor. As governor, he touted the program, but its first cuts also happened on his watch, as did the implementation of rule changes that made the grants harder to access for some students.

In 2009, he signed legislation that dedicated millions to incentivizing research activities at public universities that aspire to “tier one” status. He was, at the time, pushing policies he had unveiled the year before that set academic researchers on edge.

Those proposals, known as the “Seven Breakthrough Solutions,” were unveiled in 2008 at a summit Perry hosted for the regents of the state’s university systems. They encouraged schools to be more businesslike, treating students as customers whose desires should be catered to, and to separate teaching and research budgets for greater transparency, a move many academics felt was anathema to their mission.

The controversial concepts — and the subsequent backlash against them — could prove to leave the most lasting impression on the state’s collective memory, even though they never got too far.

In 2010, when efforts to implement some of the solutions at Texas A&M University sparked outrage among faculty and a strong rebuke from national academic leaders, officials walked those efforts back.

In 2011, a group of the University of Texas at Austin’s well-heeled and influential alumni pushed back when they feared the reforms were about to be pushed on their university. The controversy has yet to die down, even though the proposals were never put into practice. 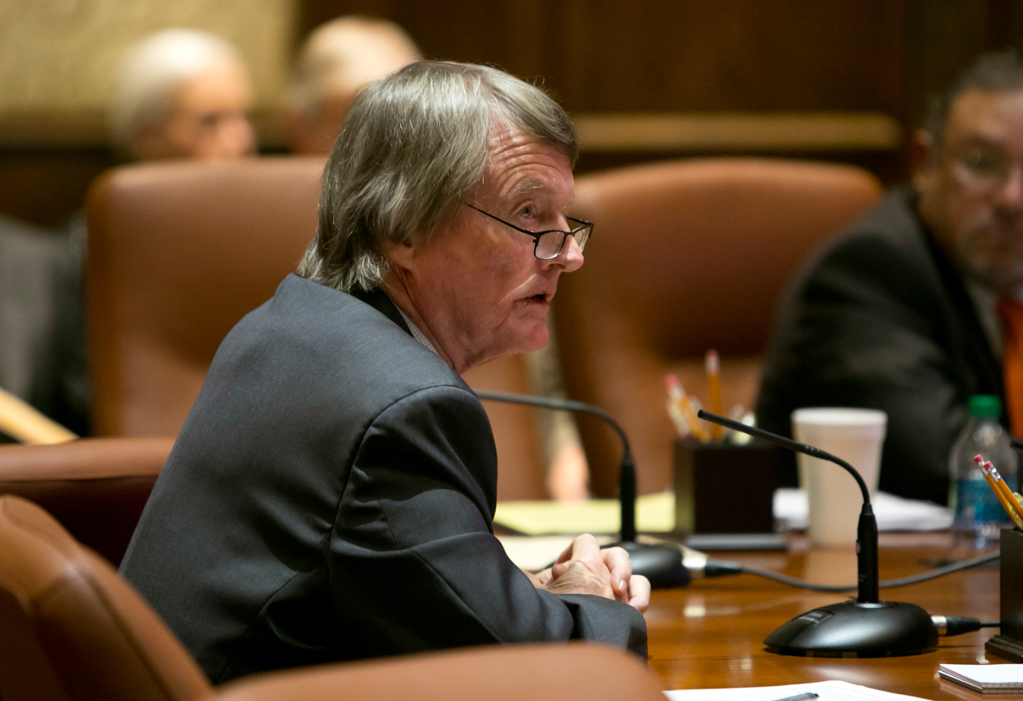 University of Texas at Austin President Bill Powers at a UT System Board of Regents meeting on July 20, 2014. Photo by Marjorie Kamys Cotera

The tensions at UT-Austin have largely morphed from policy disagreements to personality conflicts. One of the system’s regents, who — like all the others — was appointed by Perry, was censured by lawmakers this year after a yearlong investigation into his antagonism toward the flagship university. The UT System’s chancellor and UT-Austin’s president have both announced plans to step down.

Perry encouraged the conflict, comparing the fight to the Battle of the Bulge in an email to some of the regents.

While the UT community has been mired in controversy, Perry helped the A&M community build itself up into a force to be reckoned with. He has steered large state grants to his alma mater to establish a nascent biotech corridor in Bryan-College Station, and he encouraged the school’s successful move to the Southeastern Conference.

The issue that Perry has perhaps been most consistent on could also prove to have been the most politically damaging to him.

In 2001, he signed a bill ensuring that the children of undocumented immigrants could pay in-state tuition prices at public colleges and universities. He has stood by that decision, even in the face of strong opposition from his own party.

When the issue came up in a nationally televised debate during the Republican presidential primary in 2011, Perry said of those who questioned the policy, “I don’t think you have a heart.” His poll numbers nose-dived and never recovered. Though he expressed regret for the language he used in its defense, he has not backed down on his support for what’s called the Texas DREAM Act.

Whether the policy remains a memorable part of his legacy will largely depend on whether it survives the coming legislative session. With Perry gone, its continuation is in doubt.

Disclosure: Texas A&M University and the University of Texas at Austin are corporate sponsors of The Texas Tribune. A complete list of Tribune donors and sponsors can be viewed here.