During his 14 years in office, Gov. Rick Perry has championed private-market health care solutions and criticized public programs like Medicaid for being inefficient. He has also led the state’s fight against the Affordable Care Act, which he has criticized as federal overreach. But as he wages such battles, he has presided over a state with the highest rate of uninsured in the country.

“He has clearly had a very Texas model toward health care reform, which is consistent with his approach to many other policies, focusing on a very limited-government approach,” said Mark P. Jones, a political scientist at Rice University.

Perry has said the government’s obligation to help people without health insurance is limited. On the presidential campaign trail in 2011, Perry told a crowd in New Hampshire that a federal law requiring most hospitals to provide emergency care to patients, regardless of their ability to pay, means that “everyone in the state of Texas has access to health care.”

His view contradicts that of President Obama, whose signature health reform law sought to provide near-universal health coverage in the U.S. The Affordable Care Act encouraged states to expand Medicaid coverage to low-income adults and required everyone else to have health insurance or pay a fine. Perry has challenged the law as “socialized” health care and fiscally irresponsible.

In 2012, the U.S. Supreme Court ruled that states were not required to expand their Medicaid programs. Days later, Perry penned a scathing letter to then-U.S. Health and Human Services Secretary Kathleen Sebelius, explaining that he would not allow Texas to expand Medicaid because it “would threaten even Texas with financial ruin.”

Perry’s stance on Medicaid expansion has drawn praise from fiscal conservatives and criticism from the left, which accuses him of forsaking the more than 1 million Texans in the “coverage gap” — people who would have been newly eligible for Medicaid. 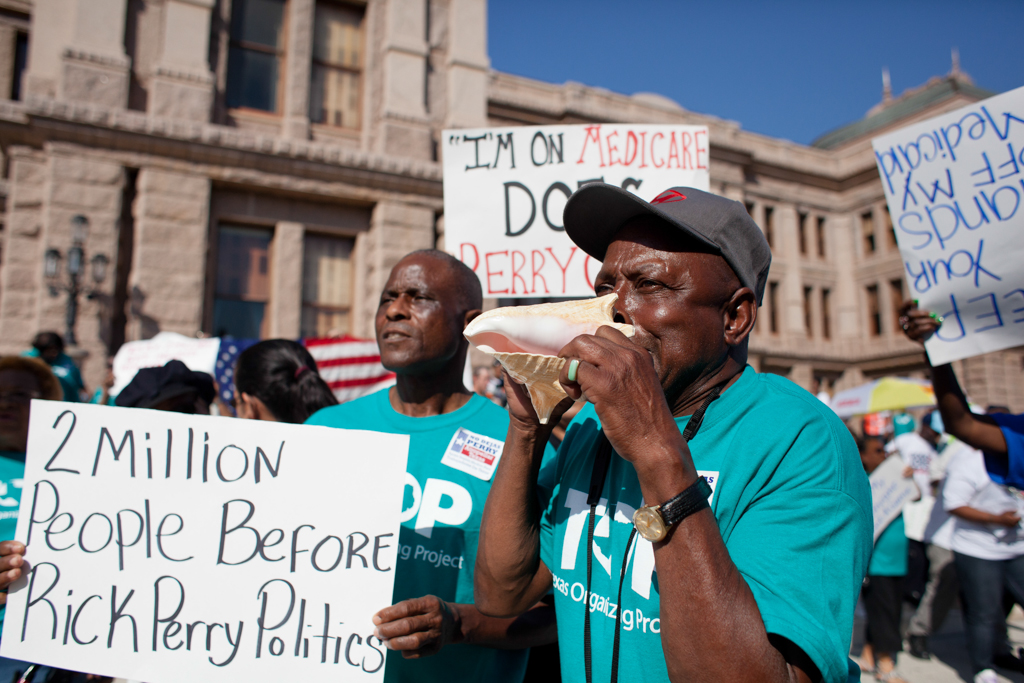 A September 2013 protest against Gov. Rick Perry's refusal to expand Medicaid coverage in Texas under the Affordable Care Act. Photo by Callie Richmond

Perry won praise from doctors when he led the charge on tort reform in 2003. That year, Texas revised its rules through a constitutional amendment voters passed to cap the amount of awards patients could receive for pain and suffering in medical malpractice lawsuits.

Perry has said the changes stopped frivolous litigation and spurred more physicians to come to Texas, though some of the claims have been disputed.

Studies suggest that tort reform drove down medical malpractice insurance premiums and reduced the number of health care lawsuits. Many doctors say the change has encouraged them to practice in the state. Since Perry’s tenure, physicians’ groups have made support for tort reform a litmus test for candidates seeking their support.

During Perry’s time as governor, Texas has faced several debates over women’s health. As the state has tightened abortion regulations and restructured programs that provide health services for women, opponents have accused the governor of waging a “war on women.”

In 2011, Texas passed a law requiring women to have a sonogram at least 24 hours before an abortion. The law also requires doctors to play the heartbeat aloud, describe the fetus and show the woman the image unless she chooses not to view it. 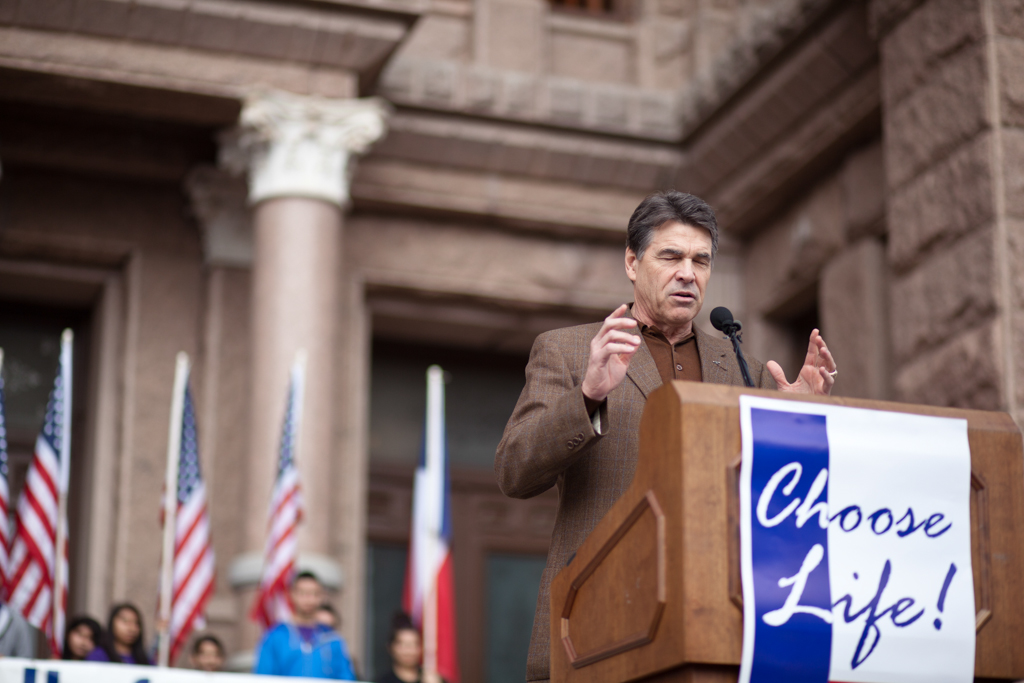 Gov. Rick Perry at an anti-abortion rally at the state Capitol in January 2013. Photo by Callie Richmond

Perry said he was proud to have signed a budget that “defunded” the organization’s affiliates operating in the state, but some health care advocates said Republicans created roadblocks for women seeking state-subsidized health services because the cuts led to the closure of 76 women’s health clinics statewide.

The ousting of Planned Parenthood from the budget also led to a drop in claims for birth control and wellness exams as well as enrollment numbers in the state’s Women’s Health Program, which was created to help low-income Texas women. State health officials said at the time that there were pockets of the state where the program now lacked providers.

In 2013, state lawmakers passed a large financial package for women’s health, but they also passed some the strictest abortion regulations in the country. The legislation was passed during a special legislative session called by Perry, who praised the “common sense” measure.

Some of the regulations are being challenged in federal court.

One of Perry’s most controversial decisions as governor was his executive order requiring girls entering the sixth grade to be vaccinated against the human papillomavirus, the principal cause of cervical cancer.

Perry’s February 2007 order was soon overturned by lawmakers. At the time, he stood behind his decision, saying that a thousand women would likely be diagnosed with the disease in the next year.

“I challenge legislators to look these women in the eyes and tell them, ‘We could have prevented this disease for your daughters and granddaughters, but we just didn’t have the gumption to address all the misguided and misleading political rhetoric,’” Perry said.

Perry also brushed off criticism that he had close ties to Merck, the only manufacturer of the vaccine at the time, whose lobbyist was Mike Toomey, the governor’s former chief of staff.

In 2011, Perry, then a candidate for president, took a more conciliatory tone on the issue. He told voters in New Hampshire he was ill-informed when he signed the order and should have fostered a discussion about a possible opt-in program. But the governor’s mandate helped bring a national spotlight to the vaccine debate.

Perry was a leading proponent of the Cancer Prevention and Research Institute of Texas, a grant-making entity approved by voters in 2007 to spend $3 billion on cancer research.

The agency became mired in controversy in 2012 after an oversight committee disclosed that the agency had approved an $11 million grant to biotech company Peloton Therapeutics without scientific review. 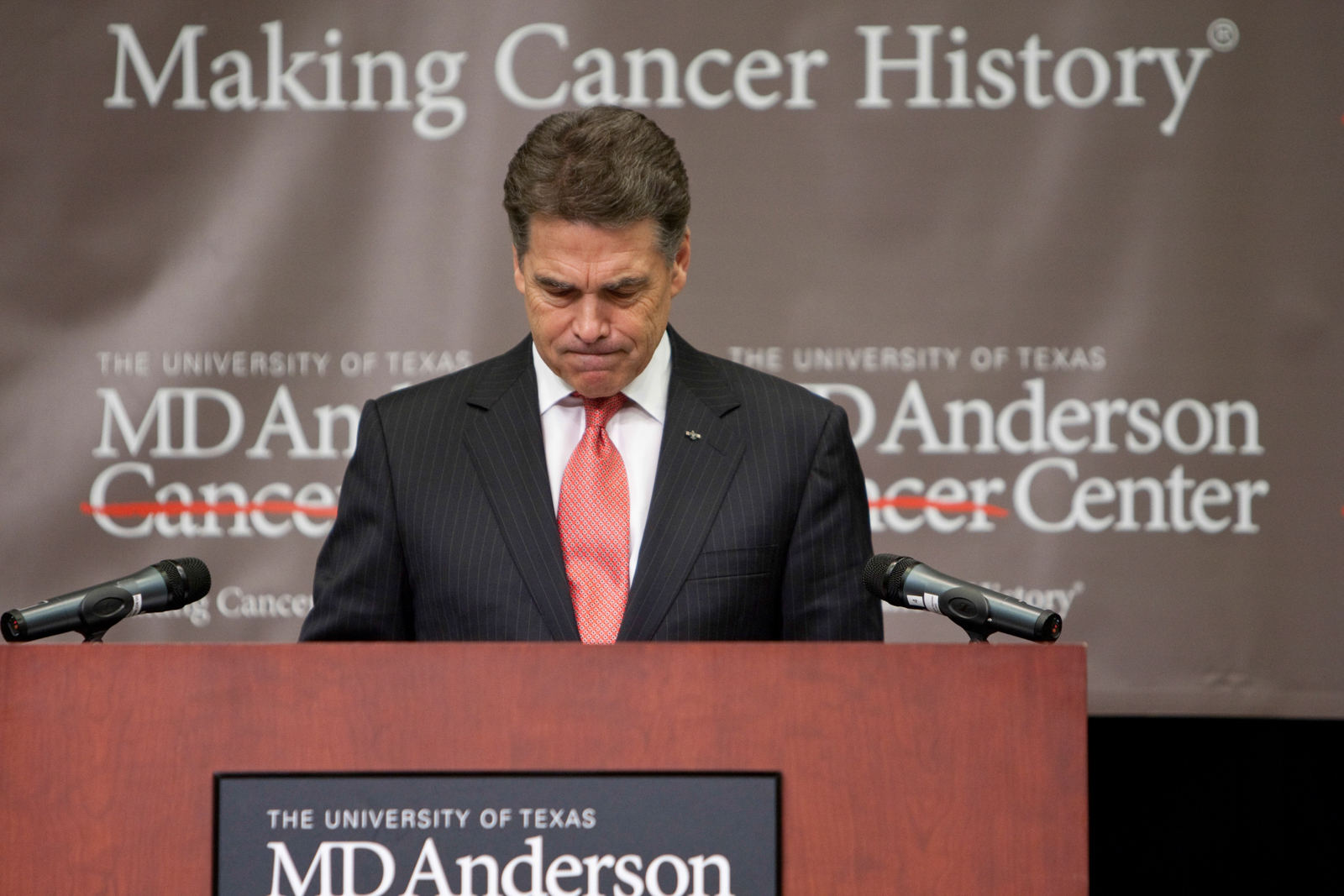 Gov. Rick Perry at the November 2011 announcement of the Institute for Applied Cancer Science at the University of Texas MD Anderson Cancer Center. Photo by Marjorie Kamys Cotera

One of Peloton’s initial investors was Dallas philanthropist Peter O’Donnell, who has donated $241,000 to Perry’s campaigns since 2000, campaign finance records show. At the time, The Dallas Morning News reported that O’Donnell had also given $1.6 million to the CPRIT Foundation, a nonprofit. State law prohibited the CPRIT Foundation from accepting donations from CPRIT grant recipients.

The public integrity unit eventually indicted Jerry Cobbs, CPRIT’s former chief commercialization officer, for allegedly deceiving CPRIT officials about the Peloton grant. Throughout the investigation, which did not focus on the governor, Perry joined state leaders in calling on the CPRIT oversight board to address concerns about the institute’s grant-making process to “restore the confidence” of Texas taxpayers.

This story was produced in partnership with Kaiser Health News, an editorially independent program of the Henry J. Kaiser Family Foundation, a nonprofit, nonpartisan health policy research and communication organization not affiliated with Kaiser Permanente.

*Editor’s note: An earlier version of this story incorrectly identified the amount approved by voters to spend on cancer research. That number is $3 billion. The story also incorrectly characterized a state law concerning the CPRIT Foundation as still being in effect. The CPRIT Foundation was dissolved in 2013.