One physical mark of Rick Perry’s 14 years as governor can be seen by driving from Austin through Abilene, then an hour northeast into Paint Creek, the speck of a town where Perry grew up.

Along the way, acres of turbines sprout from the Texas dirt, and giant transmission lines carry electricity to homes and businesses miles away.

None were there when the governor took his first oath of office, and Texas’ wind energy sector hardly existed. But the state has since become the nation’s hands-down leader in wind energy generation, and Perry — more commonly associated with oil and gas — helped steer that boom. 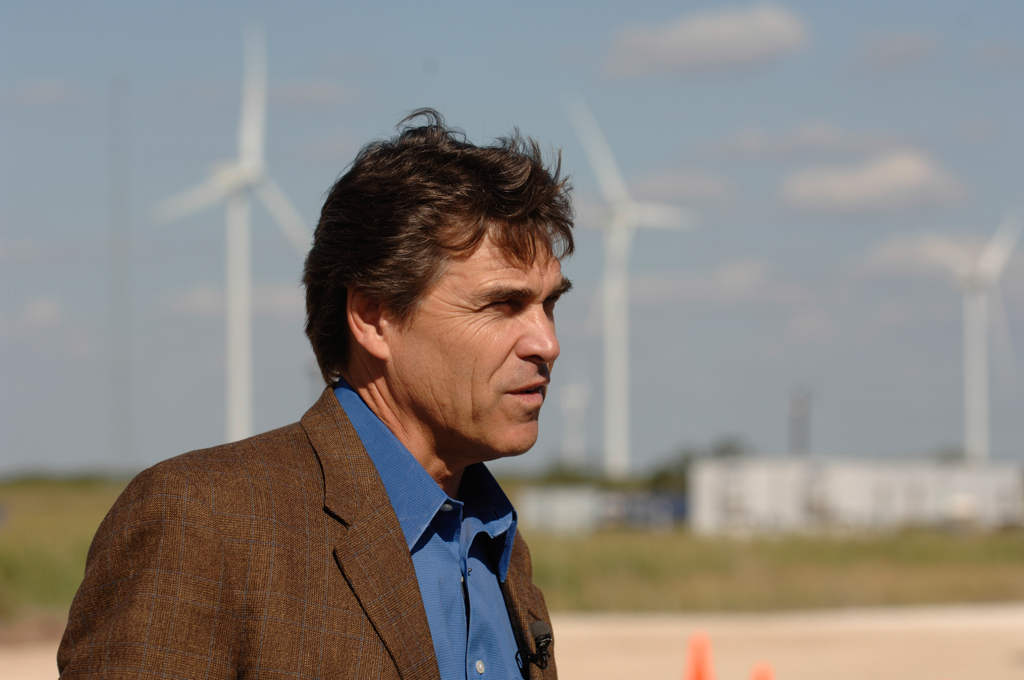 Gov. Rick Perry at the dedication of the Buffalo Gap Wind Farm in Nolan County in 2006. Photo by Bob Daemmrich

In 2000, wind farms composed just 116 megawatts of capacity on the state’s main electric grid. That number has since soared to more than 11,000 megawatts, while wind fuels about 10 percent of all generation. (On average, one megawatt-hour of wind energy can power 260 typical Texas homes for an hour.)

“His legacy on the fossil side of things is very sound, but on the wind side, he’s done tremendous things to move the state forward,” said Jeff Clark, executive director of the Austin-based Wind Coalition, an advocacy group. “Under Rick Perry, wind in Texas has moved from alternative energy to being a mainstream component of our power supply.”

Perry occasionally touts that record in his travels. “The nation’s leading developer of wind energy is not one of those progressive states on the East Coast or the West Coast,” Perry said at the Commonwealth Club of California in June. “The No. 1 wind energy producing state in the nation is along the Gulf Coast.”

Former Gov. George W. Bush laid the groundwork for Texas’ rapid wind energy growth. He signed a bill in 1999 that ultimately deregulated the electric sector — a mammoth undertaking that Perry would oversee — and established a renewable-energy requirement that kick-started wind development. Perry added to that in 2005 by signing legislation that required Texas to increase its renewable-energy capacity to 5,880 megawatts by 2015.

The state has shattered that goal.

“His legacy on the fossil side of things is very sound, but on the wind side, he’s done tremendous things to move the state forward.”

Perry also backed a $7 billion electrical transmission project to connect windy, largely empty West Texas to growing cities demanding more power. Completed a year ago, the Competitive Renewable Energy Zone, or CREZ, initiative stretches nearly 3,600 miles and can send up to 18,500 megawatts of power — including from non-wind sources — across the state.

“That we were able to build thousands of miles of high-capacity transmission from West Texas to the Panhandle without landowners marching on the Capitol with pitchforks, it’s pretty remarkable,” said Railroad Commissioner Barry Smitherman, whom Perry appointed to the Public Utility Commission in 2004 and reappointed in 2007. “And the governor had our back on that.”

Along with decisions that specifically targeted wind, Smitherman said, Perry’s oversight while the state shifted to a competitive electricity market hastened investment in a variety of fuels, leaving Texas with a balanced energy portfolio.

Kathleen Hartnett White, whom Perry appointed to the Texas Commission on Environmental Quality in 2001, said the governor’s policies — including his support of a competitive energy market — were responsible for the wind surge “with some qualifications.” Other factors, she said, included generous federal incentives, such as a now-lapsed 2.3-cent-per-kilowatt-hour tax credit for renewable energy.

“It’s difficult for me to say how, without that massive financial assistance, we would have the tremendous volume we see,” said Hartnett White, now with the conservative Texas Public Policy Foundation and a fierce critic of renewable-energy sources, which she calls “unreliable and parasitic.” She added that it might take years to evaluate whether investing in CREZ was worth the huge price tag.

Hartnett White is not the only Texas Republican scrutinizing wind policy as Perry exits office. Comptroller Susan Combs suggested in September that wind energy has “an unfair market advantage over other power sources.” And PUC Chairwoman Donna Nelson, appointed by Perry in 2011, has called for study into whether wind energy companies should chip in for power line upgrades — something no other types generator has been asked to do.

Asked about those rumblings, Lucy Nashed, Perry’s spokeswoman, said “tax credits or incentives should always be appropriately limited in scope and duration,” and she attributed the wind bonanza to an “all-of-the-above strategy to meet our state’s energy needs.”

“In Texas we have implemented common-sense policies that have enabled us to build a successful wind industry that can thrive on its own,” Nashed added.

But some environmentalists wonder if Perry’s fervor has waned, pointing to his failure to defend wind energy producers in their recent political battles.

“Perry is bipolar on wind. He plugged into when he saw he could get a political benefit. And now that the winds have changed in the Republican Party, he’s unplugged himself from one of his greatest environmental victories,” said Tom “Smitty” Smith, director of the Texas office of Public Citizen.

Disclosure: The Texas Public Policy foundation is a corporate sponsor of The Texas Tribune. A complete list of Tribune donors and sponsors can be viewed here.