Texas lawmakers are looking for ways to fill the gaps in access to health care for the state’s poorest women, three years after making sharp cuts to the state’s family planning budget and rejecting a federally financed women’s health program in favor of their own.

The state has slowly worked to restore services, though somewhat haphazardly, allocating millions of dollars to new programs that focus more broadly on women’s health care in general and less specifically on reproductive health since the Republican-led Legislature slashed the state’s budget for family planning by two-thirds in 2011. The cuts were a move aimed at preventing health providers even loosely affiliated with abortion providers, like Planned Parenthood, from receiving state tax dollars.

Today, there are six programs that primarily provide health services to poor women in Texas, which state Sen. Jane Nelson, R-Flower Mound, says she wants to streamline or consolidate.

This interactive shows the number of providers participating in six state programs that primarily provide women's health services. Select different programs from the drop-down menu and check out the corresponding map to see the number of women enrolled, annual funding, eligibility requirements and some of the services available through that program.

“We’ve got several different programs with different names, different benefits, different eligibility guidelines that I know have to be confusing to women out there because they’re confusing to me,” Nelson said earlier this year. She has hinted at accomplishing that through the Sunset review process, which allows lawmakers to periodically make sweeping changes to agencies and programs to improve their efficiency. Nelson heads the Sunset Advisory Commission.

But with fewer women already receiving state-financed reproductive health services, some lawmakers and health care advocates have warned against yet another round of changes. Other advocates argue that no amount of restructuring will mitigate the effects of losing Planned Parenthood as a major provider of these types of state services. The organization — which is disliked by Republican leaders — was already prohibited from performing abortions at Texas clinics receiving taxpayer dollars for women’s health care.

“I’m concerned about looking at any streamlining before we’ve had an opportunity to get the new programs up and running in a way that mimics the kinds of successes we were seeing with the previous programs,” said state Rep. Donna Howard, D-Austin.

Democrats suggest that Republican state leaders created the problem when they dismantled an already streamlined system through the 2011 family planning cuts, which led to the closure of 76 women’s health clinics statewide — a third of them Planned Parenthood clinics.

“A woman shouldn’t have to sort through the different program requirements to figure out which one might work for her.” 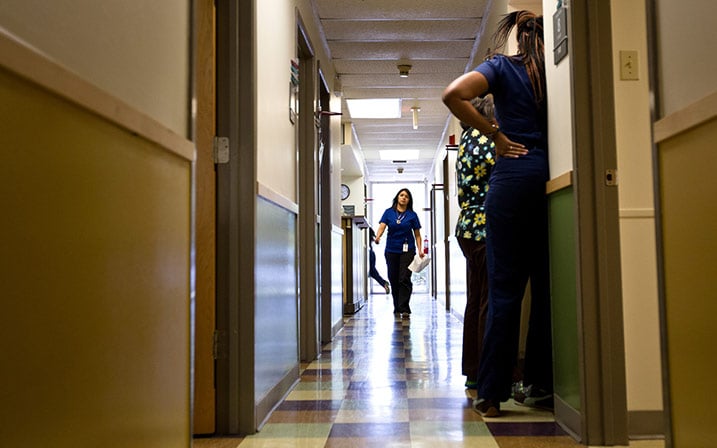 Lawmakers revisited family planning financing in the 2013 legislative session, after the Texas Health and Human Services Commission estimated that an additional 24,000 babies would be born from unintended pregnancies in 2014 and 2015 as a result of the budget cuts, at a cost to the state of more than $100 million. Lawmakers passed a financial package for women’s health, totaling $240.1 million in the 2014-15 budget, up from $127.3 million in the two years after the cuts — and $201.4 million in the two years before the cuts.

While the health commission has not received any specific directives from lawmakers, Stephanie Goodman, an agency spokeswoman, said it has identified areas for improvement in its women’s health services, including easing requirements for providers to participate in the state’s programs or creating “one front door” for all services.

That could mean that women enrolled in state-subsidized health programs would get all of the services they needed from a single provider, as opposed to going from clinic to clinic to get different types of care.

“A woman shouldn’t have to sort through the different program requirements to figure out which one might work for her,” Goodman said.

In a report to the state’s Sunset Advisory Commission, the health commission said it could improve the efficiency of the Texas Women’s Health Program if it became part of the Texas Department of State Health Services, which already oversees most of Texas’ women’s health services.

But the Texas Women’s Healthcare Coalition — a group of more than 30 medical trade associations and community-based organizations that promote access to preventive care — is asking lawmakers to slow down. They say they do not want any more big changes to women’s health services in Texas until there has been a review of the current structure’s efficacy.

Patients wait to be seen at the People's Community Clinic in Austin, which provides state-subsidized women's health services to low-income women, on July 15, 2014. Photo by Callie Richmond.

“We have mentioned in discussions that it would make more sense to look at studying things rather than changing them,” said Dr. Janet Realini, the coalition’s former chairwoman and a member of its steering committee.

The coalition estimates that there are more than a million Texas women seeking state-subsidized health services. The current system and budget meet only a third of the state’s needs, Realini said.

The Sunset Advisory Commission staff members are expected to release their recommendations in October, and legislators on the Sunset Commission will propose their own changes later this year. They will then have to take them to the full Legislature, which convenes in January.

Sarah Kirkle, the project manager for the pending review, said Sunset staff members had not received any directives from legislators on possible changes to the system. But she said they were aware of legislators’ concerns over how services are administered.

Kirkle added that lawmakers could alter the system’s structure by way of legislation in the next session even if Sunset staff does not propose any changes.

Regardless, Planned Parenthood will not be brought back under the state-financed women’s health umbrella anytime soon, which opponents of abortion in Texas support.

But without Planned Parenthood as a women’s health provider, Yvonne Gutierrez, the executive director of the Planned Parenthood Texas Votes advocacy group, said lawmakers’ efforts to improve the dismantling of a successful 40-year-old system would be an exercise in futility. She said there were simply not enough providers to make up for the loss of Planned Parenthood clinics.