Chief Fraud Lawyer Has an Independent Streak — and a Public Personality

From almost the very beginning, the controversial relationship between a giant Texas insurance company and the Travis County district attorney’s office has been overseen by a fiery prosecutor with a tendency to share her liberal politics and social views with the world.

In the past few years, Assistant District Attorney Donna Crosby has weighed in on Twitter with forceful opinions about everything from political leaders to hot-button issues like abortion and gay rights. She has called for U.S. Sen. Ted Cruz to “self deport” and declared former Gov. Rick Perry a “crook.”

Crosby, who is African-American, deemed the controversial police shooting of a black man in Cleveland “the new way to lynch us;” she said lawmakers are “usually hateful impotent men” and that “Republican(s) only stand for the freedoms of angry white men.”

Such in-your-face postings are unusual for public servants, whose government employers tend to caution workers to keep a low social media presence for fear people will confuse personal opinions with the agency’s positions. Crosby does not identify herself as a government prosecutor in the postings.

She heads a unit in the Travis County district attorney’s office tasked with pursuing fraud cases referred by Texas Mutual Insurance, which reimburses the office for the costs of the operation, including Crosby’s salary.

Whether she takes those personal opinions to the courthouse — and whether it matters if she does — depends on whom you ask.

Lawyer Janet Prueitt, who tangled with Crosby on a case in 2002, said the social media posts represent “extremely bad behavior on her part as far as I would be concerned.”

“If I were her boss,” Prueitt added, “I would tell her, ‘You better stop this right now … because you’re going to put every case we have that has white people in it in peril because of your obvious prejudice.’”

Crosby said in a recent interview with the Austin American-Statesman and The Texas Tribune that her opinions expressed on Twitter don’t influence how she approaches her job as a prosecutor.

She said she is entitled to free speech and wishes more Americans took an interest in politics and social issues.

Even some of the harshest critics of the relationship between Texas Mutual and the district attorney’s office agree that Crosby effectively executes her duties as a prosecutor even though she exhibits biases on social media.

“I say some stupid stuff on Twitter, too, and anyone who reads my timeline will know what my politics are,” said Mark Cevallos, a San Antonio attorney who represented a man in a case that prosecutors later dismissed. “I’m willing to give her the benefit of the doubt that she can put that aside and be a professional like I do.”

“Ms. Crosby is an employee of the duly elected Travis County DA and not an employee of Texas Mutual,” the company said. “We see no connection between Ms. Crosby’s constitutionally protected expression of her political opinions and the performance of her duties as an assistant district attorney.”

The Tribune and American-Statesman spent nearly six months investigating the unusual partnership between the Travis County DA’s office and Texas Mutual, which critics say creates a conflict of interest because the prosecutors’ salaries are funded by the mega-insurer. Texas Mutual authorized paying the DA’s office up to $430,000 last year. Crosby, who has headed the division for at least a dozen years, makes $113,000 a year.

“They don’t have a hired gun,” said Travis County District Attorney Rosemary Lehmberg. “They hire the prosecutor, but she’s not their gun.”

Those who know Crosby well say she is a tough and thorough prosecutor who doesn’t suffer fools gladly. Her own boss, Assistant District Attorney Gregg Cox, says she is so demanding of investigators who build cases for possible prosecution that “people don’t like working for her very much.”

Cox distanced himself from Crosby’s political statements, saying “the views expressed in this interview do not necessarily reflect the views of this office or this division.” He said her social media posts did not violate any office policies.

Both Cox and Texas Mutual officials acknowledged Crosby’s strong personality in interviews before they were asked about the social media posts.

“I know that she has clashed with a couple of TMI people in the past who felt like TMI should dictate a lot more,” Cox said. “The people that respect her independence are the ones she can work with, and she is adamant about that.”

Tim Riley, vice president of special investigations for Texas Mutual, said he has a longstanding, positive relationship with Crosby and knows and accepts her personality.

“You don’t move Donna when Donna has a position,” he said. “Donna will listen to you, but you don’t persuade Donna when she doesn’t agree with you.”

Supporters of the arrangement between Texas Mutual and the Travis County DA’s office cite Crosby’s attitude and independent streak as the premier safeguards against any chance she would succumb to pressure to prosecute an unwarranted case.

But one California-based legal ethics expert said Crosby’s posts are inappropriate. Attorney John Steele, who has taught legal ethics at several universities and is a former member of the American Bar Association’s committee on professional responsibility and conduct, reviewed a sampling of Crosby’s tweets and found them troubling.

“I could easily see some reasonable members of the public concluding that this is a prosecutor swayed by partisan passion rather than sober control,” Steele added.

Crosby’s fiery personality was on display in the 2002 dispute with Prueitt. Prueitt was the attorney for Robert Larry Wallace, whom Crosby prosecuted for insurance premium fraud.

Prueitt said she experienced what she described as an unfair pursuit of her client, a former insurance broker. An indictment accused Wallace of “making false statements” to Texas Mutual about the number of workers employed by a construction company he represented, lowering the premiums the company had to pay.

Crosby, who has worked in the office for nearly a quarter-century, said Prueitt antagonized her and “I made an unprofessional comment to her.”

“Part of me tends to walk away from people like that, but when you are following me, I’m going to say something to you,” Crosby said.

At one point in the case, which spanned several years, Prueitt asked for it to be thrown out on the grounds of “prosecutorial misconduct.” In a motion, Prueitt accused Crosby of intentionally withholding evidence and insisting her client provide an interview without her present.

A judge did not agree and declined to grant the request, delivering a victory to Crosby after deciding she had violated no conduct rules.

The case went to trial, and a judge found Wallace not guilty.

In her career, Crosby has handled violent crimes – rapes, robberies and murders. But she said “at my heart, I’m a white-collar crime prosecutor.”

She said she often felt unfulfilled when handling street crime cases because of the inability to bring restitution to victims and their families or fill the void of their loss.

“The cases are more complex, and I still learn every day,” she said. “I think I can make more of an impact here on an industry level than dealing with street crime.”

In her free time, Crosby is an exercise enthusiast, and her watercolor paintings decorate the walls of the wing of the DA’s office where she works.

She said posting to social media also helps her relieve stress, and even before the advent of social media, she wrote letters to the editor about her political views.

In a series of recent posts on Twitter, Crosby unleashed a flurry of anger and opinion. She said “men are prolife because all they do is squirt and walk away. They don’t have to deal with that life.” In a posting about Perry’s presidential bid, she replied “yawn, who cares about that crook.”

In May, after an Austin radio station announced Lt. Gov. Dan Patrick was going to be on the air, Crosby wrote: “Make sure he takes his medication and count how many times he evokes God.”

She then used a hashtag that included the words “crooked” and “unstable.”

Perry was indicted by a Travis County grand jury in 2014 over his attempts to force Lehmberg to resign following a drunken-driving conviction. He has called the case against him, which is in the hands of a special prosecutor outside of the DA’s office, a politically motivated “farce.”

Crosby would not say specifically why she labels Perry a “crook” but said that he had hoodwinked voters and the news media alike and that Twitter was a good forum for people to “get the information out there that’s not being adequately reported.”

Despite her partisan passion, Crosby says she treats every defendant fairly.

Liz Crampton contributed to this report.

Disclosure: Texas Mutual Insurance is a corporate sponsor of The Texas Tribune. A complete list of Tribune donors and sponsors can be viewed here.

More in this series 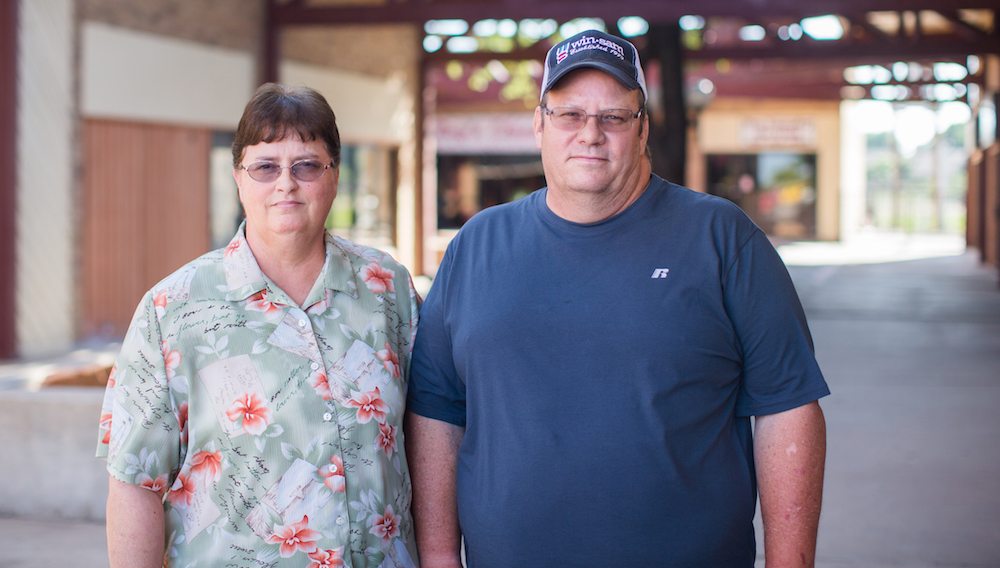 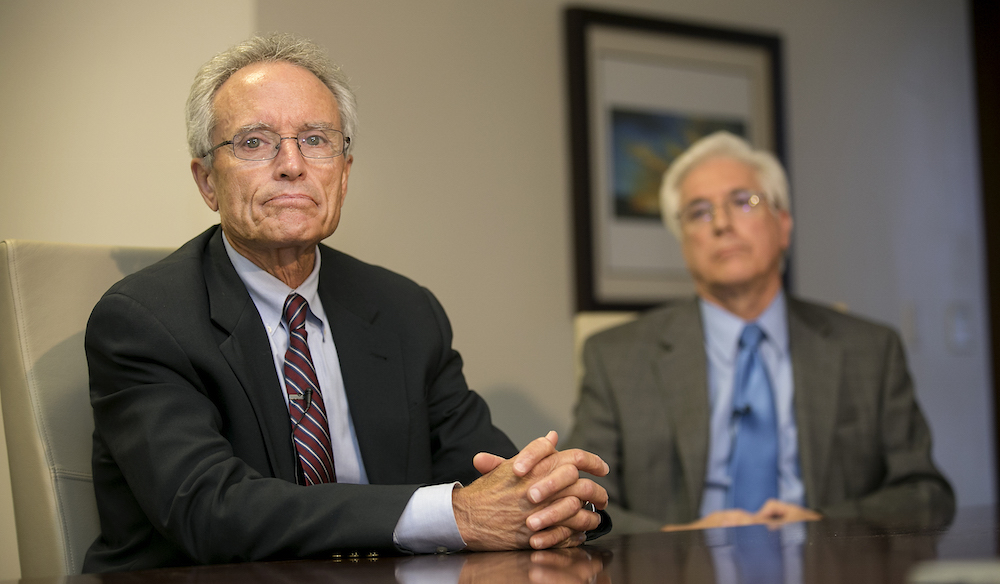 The Texas Tribune and the Austin American-Statesman spent six months investigating a unique partnership between Texas Mutual Insurance and a special prosecution unit inside the Travis County district attorney’s office. This website was developed by Jolie McCullough and designed by Emily Albracht and Ben Hasson.